So I’d always had long hair and had been obsessed with it being long (never long enough!) all my life!  I used to joke that it was because the fairy tale Rapunzel was my favourite story as a child!  I used to tell my daughter that I’d always wanted a daughter so that she too could have long hair.  I never thought in a million years that I would lose it all but….I did!  I remember thinking over the years that if I ever lost my hair I would be devastated and unable to cope!  However, it hasn’t been as bad as I thought it would be but I do really miss my long hair and am definitely going to grow it long again!

As it all happened so quickly for me I didn’t really have a lot of time to dwell on it and I was so ill that it was the least of my worries!

My husband and sister came up with the idea of getting a hairdresser friend to come over to the hospital to cut my hair into a bob so it wouldn’t be so traumatic when it started to fall out.  I can’t thank them enough for this as it really did make a difference.  The hairdresser actually platted my hair before she cut it so that I could keep it and again I thank her for this as I’m so glad she did!  I remember her styling it and I suddenly had to go back to my bed as I was so ill!  She was trying to make it look really nice.  I didn’t have long to enjoy my new hairstyle but my sister took a couple of pictures!

I remember talking to another patient and her telling me that her hair came out quite quickly and that her scalp became sore just before.  This conversation helped as it prepared me for what was to come. The day my scalp started to feel sore I knew what was coming! 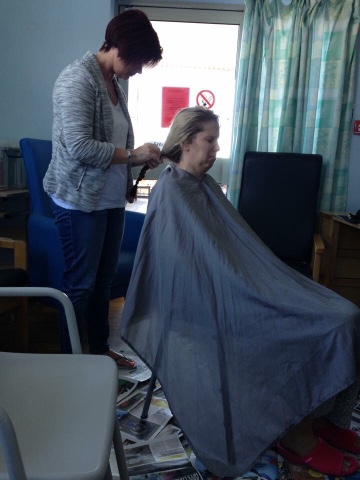 Having my hair cut off and trying not to cry!

After this I became critically ill, I was extremely drowsy most of the time due to my treatment and morphine, etc so I wasn’t aware of it coming out!  The first memory I have is of my mum and husband sitting me in the shower and washing my hair which had become really matted!  They then stood either side of me as I sat on the bed coming out the hair for well over an hour!  When they had finished there was a massive pile of hair next to me!  I didn’t really look in the mirror after this and my sister-in-law brought me a wide headband to wear until the rest of it came out, his really helped. The next day my parents went out and brought me a couple of the chemo hats too.

I never really felt self conscious although I never took my hat off in the beginning, even at night!  As I was in hospital for such a long time I was with other patients with no hair so it felt normal!  We talked a lot about hair, wigs and how we coped which was a good thing about being in hospital with other cancer patients.  I didn’t have to go out into the world very often but when I did I would get the ‘sympathy look’ from passers by.  I’d always made such an effort with my appearance and wanted to stop them and show them how I used to look! In fact when I did get the chance to show some of the nurses they were shocked!  When I looked at those pictures it felt like I was looking at an old friend I no longer knew!

I hid my bald head from my daughter for a while as I felt she’d been scared enough without having to see me looking so awful.  The first time she saw me without a hat was by accident and my husband saw her poor little face drop, but a heartbeat later she said ‘It’s ok mummy, I’m ok mummy’, I didn’t even have to ask she just knew what I needed to hear! So so brave of her…brings a tear to my eye writing this, she’s only 8!

When I was at home and someone called in unexpectedly my husband and daughter would run around finding a hat for me to put on!  How strange that this became part of our normal life!  It was a while before I was brave enough to even let close family see me without my hat on.  I may have been lucky with my friends and family but they reacted really well when they first saw me making me feel comfortable!  I do remember asking a friend, who was coming to see me with her young daughter if I should wear my hat as I didn’t want to scare her! Actually her daughter was fine and calls me ‘poorly Anna’ now!

Since my hair has started growing back I’ve still found it hard to adjust but when you have been as ill as I have you have to tell yourself its only hair!  Small sacrifice to make for my life!

In hospital after third cycle of chemotherapy

1 thought on “Losing my Rapunzel Hair”